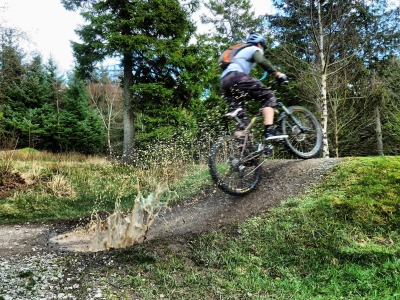 The NWAlps crew consisting of Dan, Craig, the Puppy and myself arrived in Peebles in Scotland for three days of biking. Paul and I had been before, Dan once but had hardly touched the trails and Craig was a newbie so it was interesting to see what the guys thought of the riding after all the hype and stories  i had been feeding them about how great it was.
It took around 6 hours to drive there in Craig’s amazingly comfy “Super Custom” mini bus, we dropped our stuff off at the B&B, had a quick drink at the trail cafe and started the climb up the Glentress’s freeride area. We got our eye in on the skinnies and black short cuts on the entertaining climb before reaching Buzzard’s nest and the jumps, drops and obstacles of the free ride area. We spent a good hour here, we’d picked this week hoping it would be quiet, and it was so we had run after run on the jumps until someone suggested “just one more go” which is fate’s code to produce a disaster and we knew it was time to continue on.We’d planned to stick to the easier Blue route as we were all suffering from “van-lag” But as we passed the final climb to “spooky wood”which is on the blue route, we thought, sod it, lets do the climb and put our feet up later.
Spooky wood needs no description here, It’s well documented and anyone in the UK into mountain bikes will have heard of it but suffice to say the giggles and smiles on the lads faces told the whole story as we regrouped at the end of the 1st section. the 2nd and third brought similar results and quite a lot of arm-pump with stories of near misses and how we tamed the terrain and went faster than each other.
It was a great first day and as we rolled back to the B&B we knew after a refuel, tomorrow would be even better
ride 48
12 miles
total 797