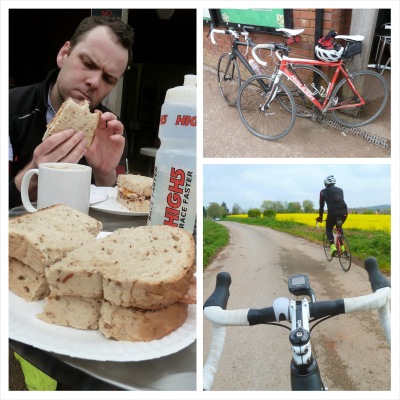 I’d arranged to meet Andy at Earlswood and guide him over the NWAlps, I think he was hoping to do around 100k for the ride and this leg was going to net him 40 or so miles of this and also involve a food stop.
I took him over the Lickeys after a stiff ascent of cherry hill and over to Waseley where he refused cake and decided to push on to Clent and the promise of a legendary bacon sarnie. Andy lives in Warwickshire which has quite a flat profile & he said he now understands why I have trouble maintaining more than 15mph average as before we met today he had been averaging 18mph and it dropped considerably when things got more lumpy. It was good to ride with someone fitter, younger and faster than me as it certainly made me put more effort in, especially as we would both upload the ride to Strava afterwards!
We reached Clent and Andy i think was surprised by the sandwich, even though i wax lyrical about it he thought it was even better than I’d described. it did need extra time to digest but happily the sun was out and we sat trying to get an early season tan whilst indulging in an extra cuppa.
Then, not wanting to completely retrace our steps we dropped down into the valley on a long winding lane before crossing to Fairfield, took the long drag back to Hopwood and i made another ascent of weatheroak hill and then pealed off for home and a coffee shop rendevous. Andy knew his was from there. we had discussed how far he was going to ride and he guessed by the time he got home it would be 70+ miles and i said if you’re going to do over 70 you might as well go for 100, and hthat’s what he did! his first century, nice one Andy.
After 50 miles my legs were feeling it and i was glad to get home, home also meant hedge and grass cutting though! I’d rather have ridden another 50 miles.
Ride 56
50 miles
Total 982
commute 326.5