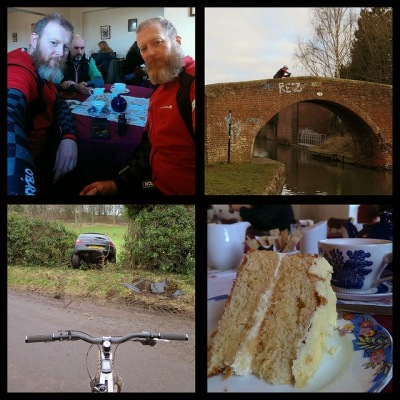 After last weeks injuries and mechanicals I thought it best to back off the technicality on todays group ride and planned a nice flat route using the canal system.
There are really only two hills on the route and the rest is flat terrain. Anyone who has been kind enough to read my blogs before will know that I’ve mention that “flat” doesn’t mean easy. The joy of bicycling as opposed to say running is that even though you have to physically power the weight of the machine up hill you also get to coast downhill (if you want) and get a bit of recovery time. However, if almost the entire ride is flat you never stop pedalling, there is never a break from turning the legs and it’s almost constant effort and this takes it’s toll.
The first canal steep hill conquered we then passed through bandit country, a very dodgy estate where unconsciously speed picks up until we were back onto the canal, then the flat part began. There were intermittent sections of very deep cloying mud and cold wide puddles to contend with too and we were soon splattered with the black gritty surface of the towpath. I was very glad of the coverage my Mudhugger mudguard gave keeping my backside comfy!.
We passed under the washboard tunnel with it’s raised brick surface, a sure fire chain unseater usually but my narrow wide chainring kept it in check on the 1 x 10 set up, even without a clutch mech.
Eventually just as energy started to flag we made it to the tea stop and cake and cyclist special ordered we tried to warm up and not drop too much mud onto the carpet! Although with the amount of cyclists in attendance I’m sure they are used to it.
The trouble with sitting in a warm café is that when you get back out side the cold is even more apparent and it was good that we had the final hill to contend with to warm us up. I shouldn’t be proud and probably shouldn’t post it here but we managed to set the speed awareness sign off going down the the other side!
So todays ride consisted of burnt out narrow boats, cake, cars through hedges and did I mention a hell of a lot of pedalling?
Ride 9
29 miles
Total 136
Commute 40