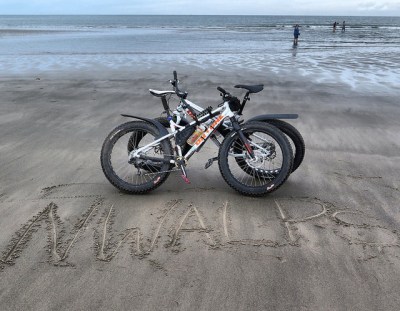 I’ve had a fat bike for nearly 12 months now, I’ve ridden it long distance on tarmac, on gravel, in mud, in dust and even in snow. It was originally designed to ride on snow and on sand and it was this latter surface that I’d never managed to try the bike out on.
Dan had a birthday this weekend and wanted to ride somewhere different. I suggested the seaside! The closest beach to the NWAlps is near bristol. unfortunately high tide was 8am and there wasn’t a lot of sand to play with there. So we decided to tick two boxes and ride The Mawddach Trail from Dolgellau to Barmouth using the bridge over the estuary.
The couple of hours journey seemed to pass quickly and seemingly in no time we were brewing coffee in the car park in Dolgellau and getting the bikes ready.
The trail is 9 miles long and very flat, so although there are no technical sections it was one big pedal all the way to Barmouth and all the way back. There were a few other cyclists and numerous walkers but the path way was wide and there were only a few gates to negotiate. With great views on our right on the way down we were soon at the bridge. The local council are threatening to close it due to lack of maintenance money. This would be a terrible shame as it seemed very popular today and i can’t see that being any different on other fine days and holidays. It also saves a long ride on a very busy road.
We crossed the bridge and hit the sand immediately, the hard packed sand on this part of the beach was fairly easy to ride with more resistance than tarmac to not requiring too much extra effort. we stopped and dropped pressure in the tyres, from around 12psi to less than 6. I could push the tyre tread all the way down to the rim with little effort it was that low. We then headed to the softer and steeper sand and the dunes, the bike felt at home straight away. I’ve ridden a normal bike in sand and it’s awful and difficult to control and make progress but the fatty was in it’s element, controllable and traction up the steep dunes was amazing. It certainly wasn’t easy though, a lot more effort was required for all this and we were soon sweating and hungry! We sat on the promenade and ate our sandwiches whilst fending off questions from passers by. If we’d charged 10p for every question we’d have had a free lunch twice over!
more dunes and surf riding followed lunch, it was great to let the bikes roll over their natural habitat.On the way back we stopped for a beer and met some friends on the trail who were down walking with venture scouts. Soon enough we were back at the car having ridden 23 very enjoyable and picturesque miles. I hope to be back on the sand again soon as it was brilliant fun!